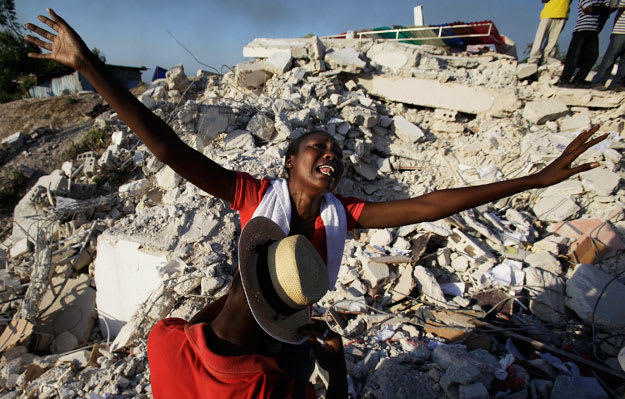 Port-au-Prince was a canyon of crushed concrete and horrified screams as Jean Samson Edouard ran panicked and barefoot through the capital’s Carrefour-Feuilles district.

“The longest night in my life,” Edouard says.

He was 23, a communications student and engaged to Joselene Saint Phard, a nursing student at the Université Saint Gérard.

The school had collapsed; Saint Phard was inside the rubble.

After racing through the streets, stumbling over people killed by falling walls, “I reached the university building and I asked someone, ‘Where is Saint Gerard?’” Edouard remembers. “And he said, ‘There.’ No building anymore. Now I lose all hope to see my fiancée again.”

It was Joselene. Her legs badly injured. But alive.

Today, Jean Samson and Joselene are married and have two daughters. They also have a deeper sense of purpose — in no small part, he says, because he also called out to someone else while searching the rubble that night.

“I said, ‘God, if you give me my fiancée back, I will serve you for the rest of my life.’”

To him, that meant: serve Haiti. I spoke with Edouard in a restaurant in West Palm Beach, where he was visiting relatives. Like so many Haitians after the earthquake, he could have come to live in South Florida.

“But I can’t,” he insists, “because I have Haiti. I need, when I pass away, my children can say, ‘Hey, my father struggled to change something in Haiti.’”

But Edouard realizes that kind of effort remains rare in Haiti, even after all these years — and he concedes the larger effort to rebuild the impoverished Caribbean nation has mostly failed.

“The earthquake gave Haiti an opportunity to take off, to learn development,” he says. “Unfortunately, nothing [has] happened. No planning. No leadership. No project.”

It’s hard to argue with him. It took a year after the quake just to get real debris removal started. It took seven years to reopen Haiti’s major hospital. Today, Haiti is facing one of the worst food shortages in the Americas. That’s not to mention the country’s endless political upheaval — and protesters now demanding the ouster of President Jovenel Moïse, who is accused of involvement in a $2 billion corruption scandal involving infrastructure project funds (which he denies).

So why, after a decade, has Haiti made so little recovery progress?

Many Haitians say one big reason is that the country’s spirit itself has yet to recover.

“When you need to be psychologically healed first, then it’s hard for you to think about development,” says Marie Guerda Nicolas, a Haitian American and a psychology professor at the University of Miami.

Nicolas was in Haiti during the earthquake, and she says it’s hard to exaggerate how brutally traumatic it truly was.

For one thing, modern Haiti had never dealt with earthquakes: This was the first there since the 1700s. That’s a big reason so much caved in: Haiti’s building codes were some of the world’s most lax.

But the quake dealt another gut punch to Haiti’s psyche: At that time, before the earthquake, Haiti was finally looking up after decades of dictatorship and dysfunction.

“We had more stability in terms of the political situation,” Nicolas says. “Economically, there was more exporting; infrastructure being built. We were moving in the right direction.”

To then have that optimism so suddenly and violently shattered only deepened Haitians’ despair. So Nicolas threw herself into creating clinical networks like Rebâti Santé Mentale (Rebuilding Mental Health) to help Haitians pull through.

A Haitian woman wanders the rubble of her neighborhood in Port-au-Prince after the 2010 earthquake.CREDIT GREGORY BULL / AP

Among her tougher cases was a woman in Léogâne, near the earthquake’s epicenter. She’d lost her 8-year-old daughter in the disaster. But she found one of the girl’s legs — by identifying her sock and shoe.

“She went home, she washed the leg and she put it in the daughter’s bed and she kept it there,” Nicolas recalls.

Neighbors, fearing the woman had gone mad, plotted to take the leg away. But Nicolas told them: “It’s a normal response for her to have. The incredibly abnormal is the earthquake.”

She ultimately persuaded the woman to have a burial ceremony for the leg. Like that mother, tens of thousands of Haitians weren’t able to bury loved ones after the earthquake.

Nicolas points to one other circumstance that made recovery more difficult: The earthquake, which destroyed the National Palace in Port-au-Prince, effectively crushed Haiti’s government, too. In fact, then President René Préval (who died in 2017) seemed to disappear.

“I think he was traumatized himself,” says Nicolas.

The international community had to fill the vacuum — and its performance was controversial at best. More than $10 billion pledged by governments never fully materialized. Worse, U.N. troops were responsible for a cholera outbreak that killed thousands more people, prompting months of angry Haitian street protests against the U.N. and, in some cases, global NGOs in general.

Critics argue that many of those NGOs that flooded into Haiti, many well intentioned but others with what Nicolas calls arrogant “savior complexes,” had scant oversight — and effectively shut Haitians in Haiti out of their own recovery effort.

“The people with the skills and the abilities to do good in their own country weren’t being utilized,” Nicolas says. “That fuels the sense of helplessness.”

Haitians protesting the U.N. and international NGOs in Port-au-Prince in 2010.CREDIT AP/YOUTUBE

But on this side of the Caribbean, especially in South Florida, the earthquake fueled a heightened sense of purpose in the Haitian expat community.

“The diaspora that always wanted to step up and be engaged self-organized and mobilized in record proportions,” says Karen Andre, a Haitian-American attorney and political consultant in Miami.

Andre says her grandmother spent the night of the earthquake outside in Port-au-Prince’s Delmas district, singing psalms to neighbors trapped in rubble to help locate them. During those same moments, in Miami, Andre heard about the disaster driving home after work on Biscayne Boulevard.

“I immediately just made a U-turn,” she recalls, “and went straight to Little Haiti, went to 54th Street.” There she helped coordinate an expat relief effort that eventually grew into an NGO: Konbit for Haiti, or Cooperative for Haiti, which steered funds to Haitian development projects run by Haitians.

Political and business elites in Haiti had always kept the Haitian diaspora at arm’s length. But Andre says the aid work emboldened expats to demand a larger role in Haiti’s affairs. And to a certain extent they got it, including the granting of dual citizenship to Haitian expats.

“The earthquake knocked a lot of dominoes down,” Andre says, “so that in Haiti we can go in and move the needle.”

A Haitian boy injured in the 2010 earthquake.CREDIT LOGAN ABASSI / AP

Since then, critics say that diaspora commitment has waned. But one Haitian expat — and earthquake survivor — who wants to help move the needle is South Florida college student Arielle François.

“Haiti’s a part of me,” says François, who studies criminal law at Florida Atlantic University in Boca Raton. “I feel like it’s my responsibility to [go] back.”

François was a schoolgirl when the earthquake hit, traveling in her parents’ car in Port-au-Prince’s Pétion-Ville suburb.

“I remember seeing a pink house literally crumble down on this man, and you just see … a line of blood,” she says. “And I saw this woman who fell on her knees and started praying. I was just 11, seeing people die in front of me is, like, even to this day I’m traumatized by it.”

Arielle Francois as an elementary school student in Petionville, Haiti, a decade ago, before the 2010 earthquake.CREDIT COURTESY ARIELLE FRANCOIS

François’ best friend Paula also died in the earthquake. Soon after, François and her family moved to South Florida — and she, admits, a better life. Now a U.S. citizen, she feels conflicted about the good fortune she’s had since the earthquake.

“I could have died like my best friend,” she says. “And the fact that we were blessed enough to come here, alive, and pursue education, I feel like I have no choice but to help my country where I was born. I can only give back now.”

François says the earthquake anniversary reminds her how urgent that is. Haitians like her hope that 10 years later, Haiti’s leaders start feeling more of that urgency too.