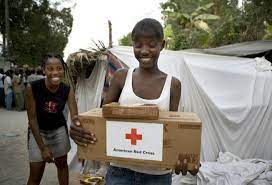 A 7.2-magnitude earthquake struck the southwestern peninsula of Haiti on August 14, killing and injuring thousands. As its citizens search for survivors among the rubble, many Haitian Americans, Black activists, and individuals tied to the Haitian diaspora are warning those interested in donating money to recovery efforts to avoid giving to the American Red Cross.

In 2010, hundreds of thousands of Haitians were killed when a 7.0-magnitude earthquake rocked the country, which resulted in an outpouring of nearly a half-billion dollars in donations to the American Red Cross, NPR reported.

Dozens of Twitter users, including many Haitian Americans and individuals with ties to the Caribbean, used their platforms to remind their followers of a 2015 joint investigation by NPR and ProPublica that documented what the two news organizations said was a gap between funds donated to the American Red Cross and what actually went toward directly assisting victims in Haiti after the 2010 earthquake.

Despite the nonprofit’s claim that it housed more than 130,000 people in the aftermath of the 2010 earthquake, the investigation revealed it had only built six permanent homes.

The investigation also found that many of the American Red Cross’ reported failings in Haiti were of its own making and that less of the money had reached those in need than the charity had stated, according to ProPublica.

Issues that hindered the organization’s work in Haiti included “an overreliance on foreigners who could not speak French or Creole,” difficulties navigating the country’s land title system, and the lack of progress souring relationships with residents.

Haiti’s prime minister at the time of the 2010 earthquake, Jean-Max Bellerive, expressed doubt about figures relating to Haitian relief efforts that the American Red Cross used in its promotional materials.

“No, no,” Bellerive told ProPublica. “It’s not possible.”

When asked about the calls on social media to avoid donating to their charity, the American Red Cross provided Insider a financial breakdown of how it spent donations following the 2010 earthquake in Haiti and said it strongly disputes the reporting done by NPR and ProPublica.

“Contrary to accusations, the American Red Cross has made a significant impact in Haiti, including investment in more than 50 hospitals and clinics, safer housing for more than 22,000 families, funding for the country’s first wastewater treatment plant, support for Haiti’s first-ever cholera vaccination campaign and so much more,” a statement from the nonprofit organization read.

“Americans donated generously in the aftermath of the 2010 Haiti earthquake to save lives – which is exactly what their donations did. In fact, we spent nearly one-third of donations on helping to keep people alive in the first six months alone.”

When one nonprofit betrays community trust, the whole sector pays for it.

Regina Birdsell, CEO of the Center for Nonprofit Management, said the real focus should be on transparency and whether a nonprofit uses the money to achieve the goals it outlined when soliciting donations. “The really important thing to remember is that [nonprofits] exist to serve the public. So as tax-exempt organizations, the trade-off is that we need to be transparent,” she told Insider.

Birdsell said that the nonprofit sector has been debating what percentage of donations is appropriate to spend internally and is concerned that nonprofits don’t talk enough about their need to pay staff living wages.

“At the end, we want to make sure that we never have the community feeling like they were misled. That dries up confidence in our sector, and that’s not a good thing,” Birdsell told Insider.

Nonprofits should proactively implement internal checks and balances before crises happen to ensure they have mechanisms in place to account for and properly disburse all donations, according to Birdsell. Even when billions of dollars are donated in response to a crisis, nonprofits need to be able to function in a dynamic environment and maintain transparency, Birdsell told Insider.

A 2016 Senate Judiciary and Finance Committee report said the American Red Cross spent a quarter of the nearly $500 million it raised for Haiti relief efforts on internal expenses, such as salaries, travel costs, and “oversight.”