Haiti’s “Roots” band RAM came to campus for a one-day artists’ residency and led drumming and dance workshops for Wesleyan students. They met with students in two classes on Oct. 8.

The group, led by Richard Morse, has produced music for more than 25 years. They recently released their seventh album, August 1791.

RAM led students in the traditional Afro-Haitian dance and rhythms, and spoke to students about how these art forms had their source in West Africa, were brought with enslaved Africans to Haiti, were part of the 1791 slave uprising, and have been passed on through the generations since Haiti won its freedom and abolished slavery in 1804.

Photos of the workshop with the West African Music and Culture class are below: (Photos by Nick Sng ’23) 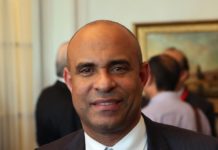