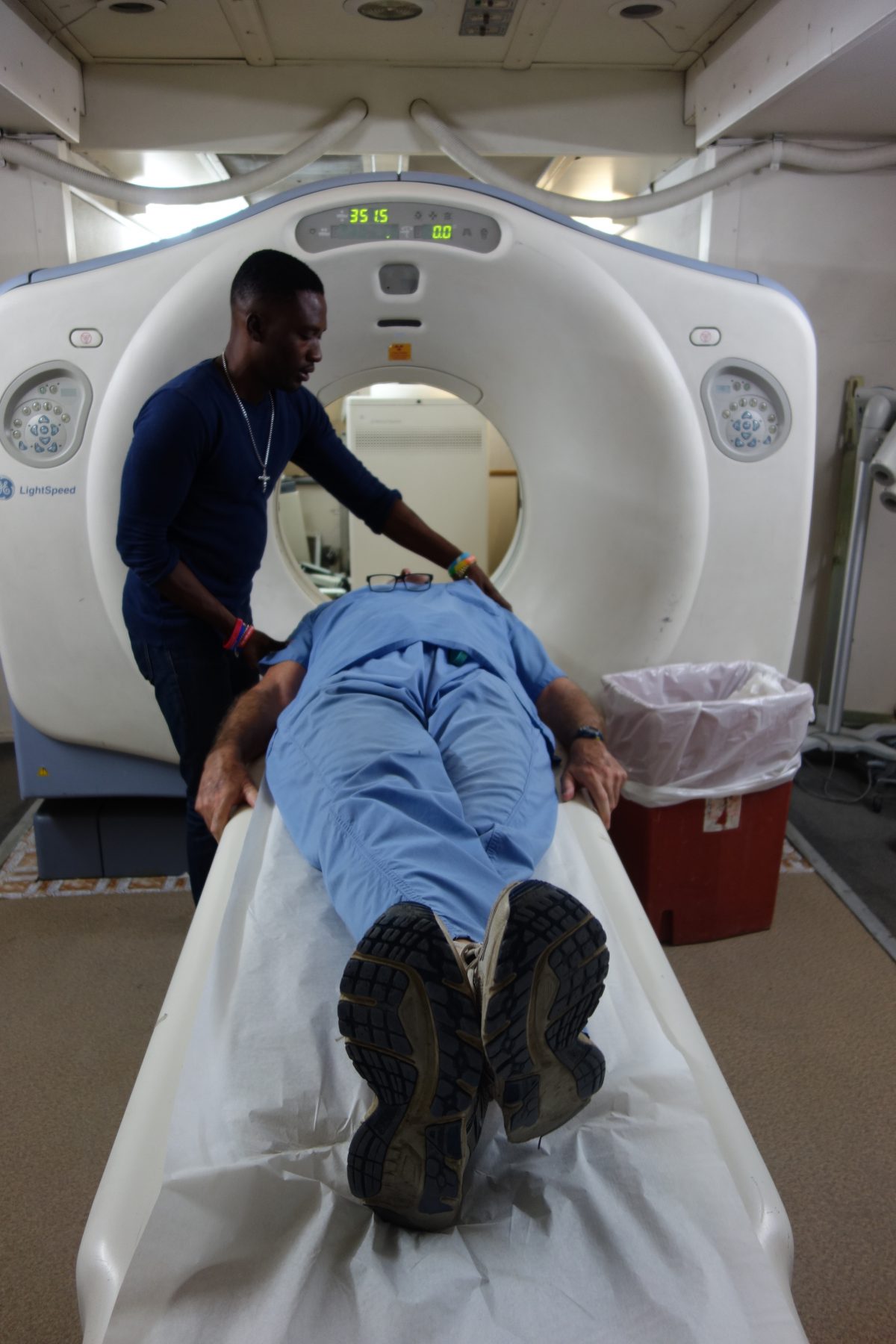 In December 2016 I developed frequent headaches which woke me up almost every morning at 5 AM. The pain was moderate in severity and dull in quality. And the pain would last a few hours and then go away. They were not my typical migraine with aura headaches that I have been getting since I was 12 years old. And the headaches kind of scared me because when something wakes you up at night, this is a red flag that can indicate something serious is lurking in your body.

I tried various medications including gabapentin and prednisone. Some medication seemed to help but nothing helped consistently.

The winter of 2016-17 ended and my headaches continued almost every night into the spring. In fact, I was not excited to go to Haiti with the headaches. I was sleep deprived and knew that I needed to be sharp in order to function well. And I had no diagnosis. I talked to my physician on the phone several times but did not go see him. Even though my physician happens to be wonderful, I simply don’t like going to the doctor and so I tried to self-diagnose my headaches. I also reached out to other physician friends of mine.  I thought they might be “hypnic” headaches which, as it turned out, none of my medical colleagues had ever even heard of let alone made this diagnosis.

April arrived and I decided to bite the bullet and go to Haiti with the headaches and see what happened. I hoped for a reprieve or even a miraculous cure.

I had a productive week working in Soleil but the headaches continued waking me in the early hours, leaving me groggy in the mornings, and so I decided I had to do something. I decided to get a CAT scan in Port-au-Prince. There was a scanner at Bernard Mevs Hospital which had been donated by Wyclef Jean after the epic Haitian earthquake in January of 2010.

On May 4 I went to Bernard Mevs late in the afternoon and climbed the steps to enter an air-conditioned trailer housing the CAT scan. I made up my mind on the way to the hospital that if the CAT scan was abnormal, I would return home and get the full workup. Also, I rationalized that getting the CAT scan done in Haiti rather than in the States would be less expensive because my Blue Cross/Blue Shield insurance has a very high deductible even though I pay a premium over 800 dollars per month.

A Haitian CAT scan technician greeted me just inside the trailer and I told him I needed my head scanned. He told me that it would cost 300 dollars US and that I needed to pay at the cashier in a different building on the hospital grounds. As I walked to the cashier, I told myself that I would rather pay 300 dollars here than over 1,000 dollars in the States.

The hospital cashier area was at the end of a hall and an armed security guard stood nearby.  I had to bend down and speak to the cashier through a very small elliptical shaped hole cut in the bottom of a black tinted glass window. I slipped her 300 dollars US through this opening and she pushed out a little paper receipt of payment. I headed back to the CAT scan trailer all paid up.

Along with other emotions I was having at the time, I felt very guilty about being able to pay this amount of cash for my CAT scan. I saw many Haitian patients scattered about the Bernard Meds compound with various types of pathology unable to pay a fraction of what I just paid.

I climbed the stairs once again on the side of the trailer, showed the technician my receipt, and he ushered me into the adjacent room where the CAT scanner loomed.  I laid down in the CAT scan gantry and waited.

To make a long story short, he had to spin my brain three times to get adequate digital pictures to be able to send them to Florida to be read by an off-site radiologist. I knew this amount of radiation was not good and that CAT scans actually can cause cancer.  But I felt fairly powerless to stop this process once it had started. I was on the slippery diagnostic slope and just wanted it to be over.

At one point during the scan the technician came back in the room and told me that he was seeing a metallic object in my head at the vertex of my skull. I told him that when I was a young boy and playing in a sand pit back in Illinois, some older big boys walked along the ridge above me. They were carrying BB gun rifles and for some reason they thought it would be a good idea if they shot down at me. I dug into the side of the sandy hill as fast as I could, but it wasn’t quick enough because I felt something hit me on the top of the skull. I grabbed at my scalp and saw blood on my fingers. I had been hit in the head with a BB. I never had the BB removed and it is still lodged between my scalp and my skull.

When the technician said the scan was complete, I got down from the gantry and went back into the room with the digital photographic pictures of my brain displayed on the monitor.

I am definitely not an expert reading CAT scans of brains, but my attention was drawn immediately to a black shadow in my left frontal lobe. It appeared quite large to me and I didn’t like what I saw.

I calmly asked the Haitian technician what he thought of my scan and he pointed to the same area right away which was visible on multiple slices. It looked like a cerebral infarct to me and the technician agreed. In other words, it appeared that I had a stroke at some time in the past.

As I stood there in the trailer staring at my scan, I was wracking my brain how I could have stroked. I thought that strokes were for old people, or for people with bad blood vessels and uncontrolled hypertension. Strokes definitely were not for me.

However, I did remember that during the summer of 2016 when I was talking with my brother Tom on the phone one morning. At about five minutes into our conversation, I became unable to speak. I knew what I wanted to say but could not form the words. I was aphasic except for a few words like “yeah” and “ok”. I could understand everything my brother was rattling on about, but I couldn’t respond. I remember being somewhat concerned by this, but I couldn’t tell him that I could not talk.

Tom and I kid each other a lot…in fact, we are very very hard on each other in ways that only brothers can be with one another and still maintain a close friendship.  Finally, after much silence, Tom became frustrated and said to me, “Well, obviously you don’t want to talk with me and so I will see you later.” And he hung up.

No one was home at the time. Maria and Luke were gone. I had no one to explain this to even if I could have talked. I walked into the bathroom and looked in the mirror to see if my face appeared normal. It did. My other motor and sensory abilities seemed ok as I did a quick neuro exam on myself. But when I tried to say something like, “the toothpaste is in the cabinet”, nothing would come out.

About 10 minutes later, I noticed my vision was becoming abnormal with flashing jagged lights (scotoma) blocking part of my visual field. I immediately recognized this symptom because temporary visual loss has been part of my migraines with aura that I have been experiencing for decades.

So, as usual, I laid down on my bed to get ready to deal with a painful and nauseating migraine that almost always follow the visual loss. The scotoma lasted its usual length of 20 minutes and then the headache started.

With the onset of the pain, I tried to speak again. And lo and behold the words started coming out clearly and I could speak in complete sentences. I happily spoke out loud to myself as the headache became worse and worse.

The migraine lasted its usual four hours and then went away. I was happy because the headache was gone, I could see clearly, and my speech was back to normal.

So there I was inside the Wyclef Jean CAT scan trailer in Haiti staring at my infarcted brain and wondering if my episode of aphasia last year was causally related.  Migraine patients are considered to be at higher risk for stroke. I hoped that my infarct, so obviously present on the CAT scan, was due to a “complicated migraine” and not secondary to something else. And to confuse things a little more, I didn’t think this old stroke was the cause of my persistent headaches.

I thanked the CAT scan technician for his help (aside from the two extra “spins of radiation” I had received) and headed back to my guesthouse in Port-au-Prince.

I didn’t want to, but I knew I needed to return to Peoria for a more definitive workup including an MRI scan. I called Maria and told her that this wonderful Haitian trip needed to end.

Inhumanity on the border forces NBA players to question if the...