While the Biden administration has defended its decision to deport thousands to Haiti in recent days, internal government documents obtained by Yahoo News suggest U.S. immigration authorities are closely monitoringthe bleak conditions to which Haitians expelled from the U.S. are being forced to return.

On Sunday, U.S. Customs and Border Protection’s office of intelligence highlighted concerns of widespread food insecurity in Haiti in its daily report on current and emerging threats.

“On 24 September, Haitian authorities indicated about 4.3 million people are in a state of serious food insecurity,” reads the CBP bulletin, which was marked unclassified and “Law Enforcement Sensitive.” The alert cites an article from a Spanish-language news site reporting that, according to Haiti’s National Food Safety Coordination agency, “insecurity, poor production, natural disasters and inflation are the main drivers of current levels of severe food insecurity” on the island, while “gang violence has complicated the delivery of humanitarian response to the food crisis.”

Another report produced by the CBP intelligence office on Monday references an Associated Press article on the dire situation for Haitians returning home.

“The deportees join thousands of fellow Haitians who have been displaced from their homes, pushed out by violence to take up residence in crowded schools, churches, sports centers and makeshift camps among ruins,” reads the excerpt of the AP report cited in the CBP alert. “Many of these people are out of reach even for humanitarian organizations.”

The reports highlighted by CBP’s intelligence office seem to contradict public statements made by Homeland Security Secretary Alejandro Mayorkas, who has defended recent deportations of Haitian migrants despite concerns about conditions in the country following the president’s assassination in July and a devastating earthquake in August.

According to the Department of Homeland Security, since Sept. 19 the U.S. has expelled approximately 3,900 individuals to Haiti on 37 flights.

“We have continued to study the conditions in Haiti, and we have in fact determined, despite the tragic and devastating earthquake, that Haiti is in fact capable of receiving individuals,” Mayorkas told reporters at the White House on Friday. “And we are working with Haiti and with humanitarian relief agencies to ensure that their return is as safe and humanely accomplished as possible.”

When asked to comment on the apparent conflict between Mayorkas’s statements and the CBP intelligence reports warning of food shortages and other dangerous conditions in Haiti, a DHS spokesman referred Yahoo News to similar comments made by the secretary on various cable news shows on Sunday.

“We made a determination, based upon the facts, that in fact individuals could be safely returned to Haiti,” Mayorkas said during an appearance on CNN.

The Biden administration has come under heavy criticism for its response to an influx of Haitian migrants who have attempted to request asylum at the southern border in recent weeks.

Last week, several Democrats in Congress, along with a number of civil and human rights organizations, called on the administration to halt deportations to Haiti, raising questions about the country’s ability to repatriate deportees amid multiple ongoing crises.

Back in May, Mayorkas designated Haiti for Temporary Protected Status, citing the country’s “serious security concerns, social unrest, an increase in human rights abuses, crippling poverty, and lack of basic resources, which are exacerbated by the COVID-19 pandemic.” Under the new, 18-month designation, eligible Haitian nationals already living in the United States could apply for protected status, which would shield them from deportation “until conditions in Haiti improve so they may safely return home.”

Two months later, Mayorkas expanded this designation to include Haitians who have continuously resided in the U.S. since July 29 of this year, “in light of recent events in Haiti, including the July assassination of President Jovenel Moïse.”

While Mayorkas has acknowledged his earlier decision that Haitian nationals could not be sent back to the country safely, he insists that is no longer the case — even after the 7.2 magnitude earthquake that struck the country on Aug. 14, killing at least 2,200 people and leaving thousands more homeless.

Yahoo News reported last week that the Biden administration failed to anticipate the latest influx of Haitians at the U.S. border with Mexico, despite tracking Haitian migration for months. Several internal government documents obtained by Yahoo News show that multiple intelligence agencies within the Department of Homeland Security had repeatedly downplayed the potential for mass Haitian migration to the U.S. since as early as March 1.

As of Friday, Mayorkas told reporters that since Sept. 9, nearly 30,000 migrants, most of them Haitian, had been encountered by Border Patrol agents along the Rio Grande in Del Rio, Texas, where up to 15,000 people had gathered at one point in a makeshift encampment under a bridge.

By the end of the week, Mayorkas said that U.S. immigration officials had successfully cleared the Del Rio camp, with over 2,000 migrants placed on deportation flights to Haiti while thousands more had been transported to different parts of the border for processing. While Mayorkas has emphasized that the Biden administration is continuing to use a Trump-era public health order to expel most migrants, including Haitians, who attempt to cross the southern border, he noted Friday that roughly 12,400 of the Haitian migrants apprehended in Del Rio will be allowed to remain in the United States while they make the case for asylum or other protections before an immigration judge.

Internal administration documents obtained by Yahoo News showed there were still migrants awaiting processing in Del Rio on Friday morning. Approximately 2,000 Haitian migrants have been bused to shelters in Houston, and hundreds more have been allowed to board domestic flights in San Antonio, according to a Sept. 24 “Sensitive But Unclassified, For Official Use Only” senior leadership brief produced by the Department of Health and Human Services. 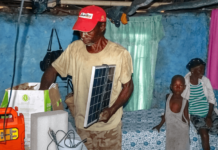