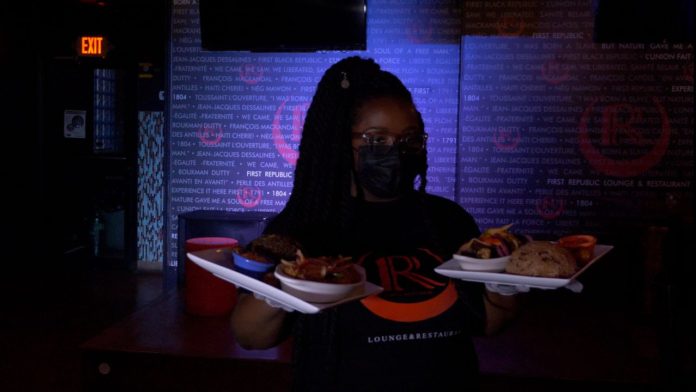 In 2013, five friends came together to create something new in Midtown Elizabeth, something that reminded them of the place they called home — the small Caribbean country of Haiti.

The result: First Republic Restaurant and Lounge, where Haitian-Americans, and anyone familiar with the distinctly West Indian cuisine, can score authentic meals that taste like some “good home-cooking,” the owners said.

On weekends — pre-pandemic — the joint doubled as a small-scale Haitian nightclub, sometimes packed wall-to-wall, as patrons danced to traditional konpa music or American hip-hop. Some evenings, it played host to comedy shows and open mic nights, akin to the atmosphere on an episode of “Def Comedy Jam.”

But First Republic Lounge is as much a deliberate statement as it is a vibe. Haiti is a country with a rich history, full of resilience.

The establishment’s moniker is a direct reference to the Haitian Revolution, lasting from 1791 to 1804. It’s a moment in history which defined its fighting spirit. The former French colony became the first country in the Americas to be founded by formerly enslaved people.

Paintings by Haitian artist Kervin Andre trace the walls of this dimly-lit spot, giving off the feeling of dining in an art gallery. Each composition depicts the story of Haitian independence. Names of Haitian revolutionaries and some of their famous quotes are printed on a wall next to the restaurant’s stage.Keep up with the latest stories on race, diversity and inclusion in New Jersey. Sign up with your email:

The culture is served on a platter every day, each time someone orders black mushroom rice, creole shrimp or tasso kabrit (fried goat), along with a host of other staples found across the island.

Some dishes have historically symbolic origins, like the popular soup joumou (pumpkin soup). For Haitians around the globe, it’s part of an important New Year’s Day tradition.

It’s one that resonates with everyone who works at First Republic. Each of the restaurant’s owners, a group of five friends who met at Kean University in Union, hails from Haiti or is of Haitian descent.

“We always want to showcase the culture in a way that people have never seen before…or to inspire the younger generation of Haitian descent (to show) that they, themselves, could own an establishment,” said co-owner Colomb Thomas-Petit.

The restaurant’s mission extends far beyond the walls of its brick-and-mortar edifice, beyond New Jersey state lines and even beyond U.S. borders. The idea for the establishment was born out of a genuine desire to help Haiti rebuild after a 2010 earthquake that devastated the island, and killed nearly 250,000 people.

“One of the things we were wondering was how to really help Haiti. And how to rejuvenate Haiti’s image and culture,” said one founder and owner, Stanley Neron. “We wanted to showcase it and put it on a silver platter.”

The proprietors also formed NJ 4 Haiti, a partnership with United Way of Greater Union County. Through the organization, some of First Republic’s proceeds go toward an annual service trip to the partners’ homeland — flanked by doctors, engineers, mental health specialists and social services professionals, according to its website.

“We’ve been in Haiti now for the past 10 years, working on water purification, working on mobile clinics, supporting education, supporting schools, and orphanages, and making sure that there’s hope,” Neron said.

The trip can be a grounding experience, the owners said.

“It’s a wake up call in terms of the needs that are in demand in Haiti. The things we all take for granted here, people would die to have,” said Thomas-Petit. “When we do go, what we see is how resilient people are in Haiti.”

In Elizabeth, First Republic has become a Midtown pillar and a vital cog in the machine for economic development in the Garden State’s fourth most populous city, according to officials.

“It’s more than a restaurant. It’s a place where art meets culture,” said Jennifer Costa, President and CEO of the Greater Elizabeth Chamber of Commerce.

Costa called First Republic Restaurant and Lounge a “cornerstone” in the community. The business has stepped up to help first responders during the coronavirus pandemic and hosted a socially-distanced Juneteenth event earlier this year. First Republic is active on social media promoting events at the location and causes around town.

“It’s all in their programming and their approach. There hasn’t been a time I haven’t picked up the phone…calling them to do a collaborative partnership, or (something) innovative,” Costa said.

“They really are a community leader.”