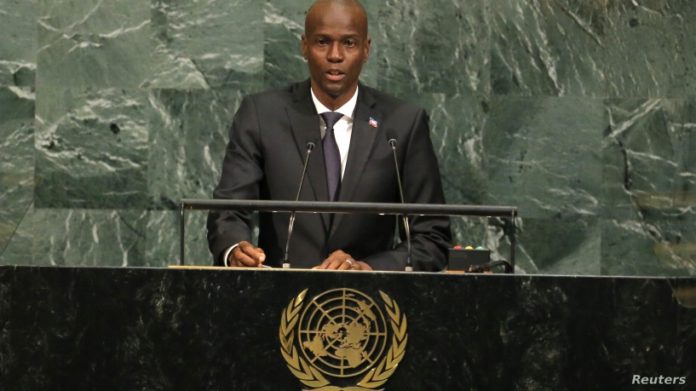 WASHINGTON / NEW YORK / PORT-AU-PRINCE – Haiti’s President, Jovenel Moise, will not travel to the United States as planned Tuesday, to speak before the United Nations General Assembly.  The president issued a statement late Monday announcing that Foreign Minister Bocchit Edmond would lead Haiti’s delegation to the U.N. and speak before the general assembly on behalf of the nation.

The cancellation comes after news of a postponement of his departure for New York, and on the heels of a chaotic, violent day at the Haitian Senate that saw two people wounded when a Senator fired his gun ahead of a vote to confirm the prime minister designate. An AP photojournalist and a parliament security guard were wounded during the incident.

President Moise and some members of his government are mired in controversy and corruption allegations.

On Sunday, opposition Senator Youri Latortue accused him of “misappropriating” Haitian passport revenue collected by the Embassy in Washington to finance his trip to the U.N.

“Minister Bocchit withdrew $298,000 US dollars from a government bank account for President Jovenel’s trip. He took an additional $60,000 from the New York Consulate account. That’s a total of $348,000 U.S. dollars. Plus the Haitian money they withdrew,” the senator alleged.

Senator Latortue said that money should have been used instead to help the victims of a mass flood in the southern town of Petit Goave on Saturday, which killed several people including children and damaged homes.

He also alleged that the large sum of money was not needed because the U.N. finances the trips of the leaders of member countries and their hotel stays for U.N. General Assembly.

But Foreign Minister Bocchit Edmond refuted the allegation in an exclusive interview with VOA Creole at the United Nations.

“If Senator Latortue felt there were irregularities, he knows there are institutions in place which can deal with such matters. In addition, Senator Latortue was an advisor to a president of the republic, he is well aware of the rules and regulations the chief of state must abide by. So he therefor knows that the Haitian Embassy in Washington is in charge of planning the President’s visit to speak at the UNGA. And since he was also adviser to the former prime minister of Haiti – he knows these rules well,” Edmond said.

Responding to the assertion that the U.N. finances leaders’ trips to speak at the UNGA, the foreign minister said ” This is false. There are 193 member nations, each delegation is responsible for the expenses of its members.”

Edmond quipped that the senator should verify his information before making such accusations.

During mass protests on September 20, where thousands took to the streets of Port-au-Prince to demand the president’s resignation, several protesters told VOA Creole that President Jovenel Moise shouldn’t be making any speeches at the U.N.

“Jovenel will not represent us at the United Nations!” a protester from the Cite Soleil slum of the capital who was in the streets after the shooting incident at the parliament said. “International community, United States, please take him off our hands.”

That sentiment has been echoed by members of the opostion as well.

A group of protesters blocked a road near the national palace Monday with a white box truck, then painted red graffiti saying “Jovenel we’re waiting for the keys”.