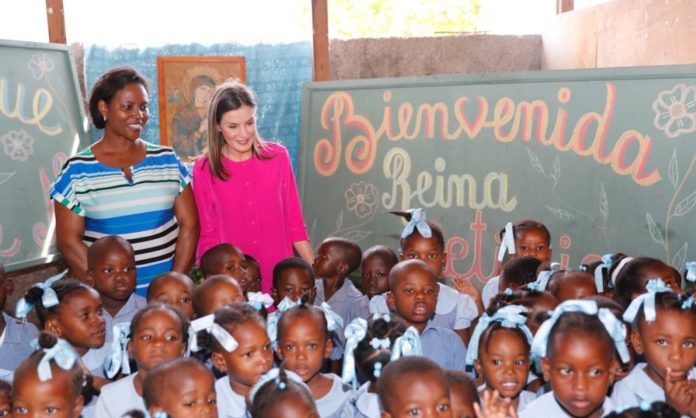 On 23 May, Queen Letizia spent her last day in Haiti, ending a three-day co-operation trip to the Dominican Republic and Haiti.

She first travelled to the Cité Soleil neighbourhood where she visited the Educational Centre of the Sisters of St. Vincent de Paul, in which Spanish Co-operation is financing several projects and, in particular, one on the sanitation of the complex.

Afterwards, Queen Letizia was received by the President and the First Lady of Haiti to have an official lunch at the Presidential Palace. The First Lady and the Queen then visited the National Museum of the Haitian Pantheon where the Queen of Spain held a meeting with a group of prominent Haitian women, to learn about the situation of women in that country.

At the Liceo Alexandre Petion, Queen Letizia attended a meeting with students and Spanish teachers, who will perform various performances before the Spanish delegation. This was the last event of the trip as the Queen then departed from Port-Au-Prince to travel back to Madrid.

This was Queen Letizia’s third co-operation trip since becoming Queen in June 2014. Before that, Queen Sofía was the one taking part in those cooperation trip.