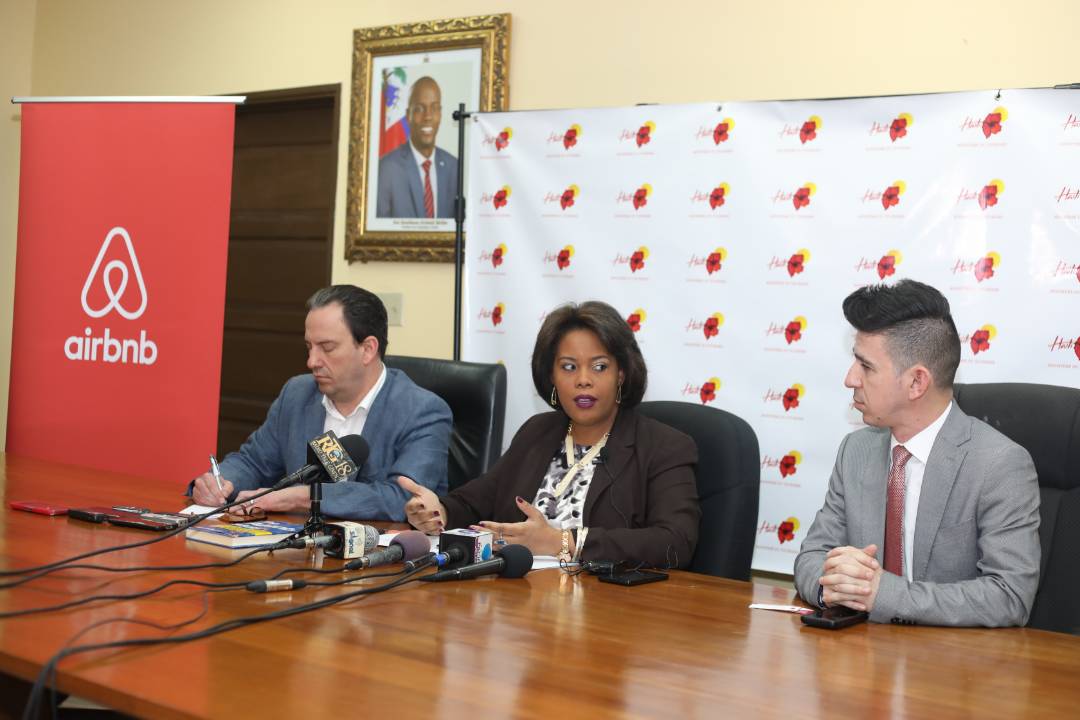 Based in 191 countries, the Airbnb platform, specialized in the reservation and rental of online housing, took a decisive step on January 31, by signing with the Haitian Government, through the Ministry of Tourism, an agreement aimed among others, to promote Haiti as a touristic destination.

By signing this document, the two parties want to allow all those interested in the matter, once they own “a house, a smartphone and a bank account”, “to register their home on Airbnb platform and possibly to rent it to tourists or visitors passing through Haiti, for a time not exceeding 120 days “.

The Loop Haiti editorial board got in touch with one of Airbnb’s managers for an exclusive interview. Shawn Sullivan, Head of Public Policy at Airbnb for the Caraibean and Latin America first explains why his platform has taken its toll on Haiti.

“Airbnb was founded on the belief that travel and tourism help break the walls between people, broaden the understanding of the world around them, and help build trust between people. We believe that Haiti is a unique destination with a fascinating history and culture and that Haitians are very warm, welcoming and hospitable people. Sustainable tourism can have a significant positive impact on a country’s economy and we believe there is significant potential for developing the tourism industry in Haiti. Airbnb loves Haiti, “says Shawn Sullivan.

He continues, “Through this agreement, Airbnb will provide global data to the government on the use of Airbnb in the country; we will promote Haiti as a tourist destination; we will launch a digital marketing campaign, establish a stakeholder working group, and organize discussion meetings and training across the country. ”

In its 2016 report, the International Tourism Organization estimated that Haiti received 516 thousand tourists. While the Dominican Republic, the neighbor next door, has received 5 million 600 miles (ten times more than Haiti). Jamaica, though half as small as Haiti geographically, received for the same period, 2 million 123 thousand tourists. And according to experts, Haiti does not take enough advantage of the international publicity on tourism.

Hence questions about what Haiti should do to be more attractive to tourists. Shawn Sullivan from Airbnb wanted to provides this answer : “Promoting destinations in major markets, especially in the United States and Europe, is essential for any country seeking to attract visitors. This is something that Minister Menos (Haitian Tourism Minister) and this government are committed to do. Another thing that destinations must do is build their tourism infrastructure. This obviously takes time and a significant investment, but Haiti is ideally suited for that. Airbnb is in talks with the Inter-American Development Bank to see how we can help with this issue in Haiti, “he says.

LOOP: On this point, we know that Airbnb intends to invest in the construction of its own homes (which will be named Niido powered by Airbnb). According to the latest news, the kickoff should be given in Florida. Is there a similar plan for Haiti? “Not for the moment,” says Sullivan, while stressing that, contrary to what some believe, the discussions on the partnership between Haiti and Airbnb were already beginning even before the outbreak of the controversy related to the statements of the American president, Donald Trump about Haiti, El Salvador and African countries.

After announcing mid-January, the investment of at least $ 100,000 in digital advertising for its accommodation in Haiti, El Salvador and Sub-Saharan Africa, to propel tourism in these places, Airbnb has just taken the step in signing with the Ministry of Tourism of Haiti.

Created in 2008, Airbnb is now present in more than 34,000 cities and 191 countries. According to a Fortune.com report, the company generated $ 170 million in revenue last year. Its head office is in Ireland.