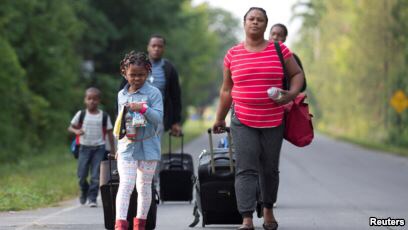 Haiti has formally requested that U.S. immigration authorities grant an 18-month extension to a program of humanitarian aid for Haitian nationals living in the United States.

More than 50,000 Haitian immigrants are registered for Temporary Protected Status (TPS), set to expire January 22. TPS, offered after a massive 2010 earthquak struck near the capital city of Port-au-Prince, permits them to temporarily stay in the United States, with work privileges, until conditions improve in their homeland.

In May, the U.S. Department of Homeland Security announced it would extend TPS by six months, not the one-year minimum sought by Haiti’s government and some advocates. Fear of deportation sparked an exodus of at least several thousand Haitian immigrants this summer, who illegally crossed the Canadian border seeking asylum in the French-speaking province of Quebec.

The Haitian government’s letter requesting the longer TPS extension was submitted to the U.S. Department of Homeland Security on Friday, according to the Miami Herald.

Written by Haiti’s ambassador to the United States, Paul Altidor, the letter included an invitation for Homeland Security’s acting director, Elaine Duke, to visit the country before the Trump administration makes its final decision on extending TPS. That’s expected as early as November.

During a June visit to Haiti, then-Homeland Security Secretary John Kelly said he thought Haitians’ protection from deportation would end in January.

“I’d have to look for indicators as to why we might extend it a short period into the future past January,” he told a Haitian radio journalist who shared the interview with VOA. The TPS program, Kelly said, “is designed to end and not go on forever.”