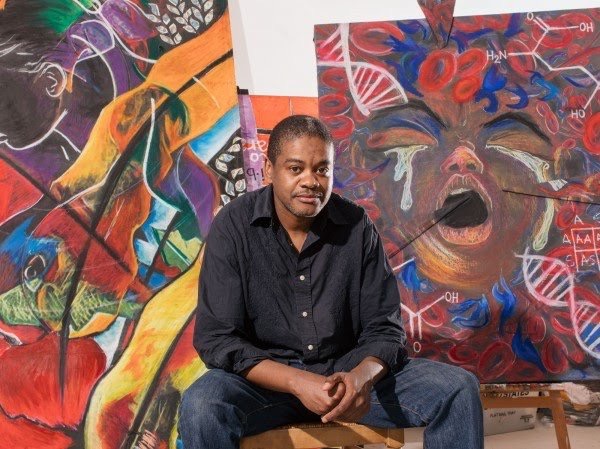 Hertz Nazaire is a soft-spoken artist who likes to paint in bright colors, with subjects like rainbow palm leaves and dancing women in twirling skirts. But one series of paintings he’s created is darker. Here, deep-red discs contrast with misshapen, bluish-purple ones against a black background. One canvas shows an African face drowning in the red and blue shapes, eyes streaming with tears, mouth agape in pain. The work reflects his lifelong struggle with sickle-cell disease.

Nazaire, a 43-year-old Haitian-American, figures he’s been hospitalized more than 300 times since he was a child. He and other sickle-cell patients will tell you that the worst part of the disease is the debilitating pain. “It’s a horrifying thing to have, because it’s extremely painful. It’s a major fight all the time,” he says.

Roughly 100,000 people in the U.S. have sickle-cell disease, most of them African-Americans and Latinos but also people of Middle Eastern, Asian, Indian, and Mediterranean descent. Compared with the average American, they live much shorter lives—about 40 to 60 years.

The cause of sickle-cell has been known for a century, but the disease has long been underserved by the medical establishment and the pharmaceutical industry. That may be about to change. Its genetic origin—a single, well-studied mutation—makes it an attractive candidate for treatment with the gene-editing tool CRISPR.

The idea is that CRISPR could correct the genetic mutation responsible for sickle-cell so that patients’ bodies could make normal red blood cells, alleviating the pain and other severe symptoms associated with the disease. Researchers have already tested the gene-editing tool on human sickle cells in the lab and are now working on getting the technique to clinical trials. Early results hint that sickle-cell could be among the first diseases that CRISPR essentially cures.

Despite the lingering safety concerns about using CRISPR in people, some sickle-cell patients and their doctors are already embracing it. “I would be one of the first people to volunteer and say, ‘I want to take part in a study,’” Nazaire says. He first heard about CRISPR two years ago, when he came across a YouTube video featuring Jennifer Doudna and Emmanuelle Charpentier, two of the inventors of the technology. He’s been enthusiastic about the idea of using CRISPR to treat sickle-cell ever since.

Sickle-cell disease is one of the most common genetic disorders, affecting millions of people around the world. It’s caused by a mutation in a gene known as HBB, which makes hemoglobin, a protein that transports oxygen throughout the body. Blood cells with healthy hemoglobin are red and disc-shaped. Cells with abnormal hemoglobin are shaped like sickles used to cut wheat, the characteristic that gives the disease its name.

These misshapen cells are sticky and clump together. When too many of them build up, they create blockages in blood vessels and cut off oxygen to nearby parts of the body, causing severe episodes of pain. The disease can also cause frequent infections, eye problems, and organ damage.

CRISPR Therapeutics is one of a handful of gene-editing startups pursuing new treatments for sickle-cell. The company’s approach involves isolating stem cells from samples of patients’ blood. Scientists would use CRISPR to activate a genetic switch that would raise the levels of a fetal form of hemoglobin in red blood cells, turning them healthy. This fetal hemoglobin effectively counteracts the effects of the sickle mutation. The modified cells would then be infused back into the patients.

Samarth Kulkarni, president of CRISPR Therapeutics, says this is safer than injecting the gene-editing mechanism directly into the patient. That’s risky because CRISPR can cause unintentional or off-target edits, meaning it may cut DNA it isn’t supposed to. Editing cells outside the body will allow scientists to make sure the technique works before reintroducing the cells, he says.

Testing the method in lab experiments using stem cells taken from sickle-cell patients, researchers at CRISPR Therapeutics found that 85 percent of the cells were successfully edited, which means they were able to make healthy red blood cells. Kulkarni says when the stem cells are reintroduced back into the patient, they should be able to ameliorate all symptoms of sickle-cell. These stem cells are able to travel to the bone marrow, where they make more healthy blood cells for the rest of the body. The healthy cells will proliferate, and eventually, he says, they will outnumber the sickled ones. St. Jude Children’s Research Hospital, Editas Medicine, and Intellia Therapeutics are working on similar approaches.

“Our hope is that it’s one-time and curative for life,” Kulkarni says. However, he wouldn’t say when the company plans to begin clinical trials of the technique.

Meanwhile, researchers at Stanford University School of Medicine are working on a different method that aims to directly modify the mutated HBB gene itself using CRISPR. Researchers would do that outside the body as well. Matthew Porteus, an associate professor of pediatrics at Stanford, says his team is aiming to begin a clinical trial by the end of 2018 or the beginning of 2019. 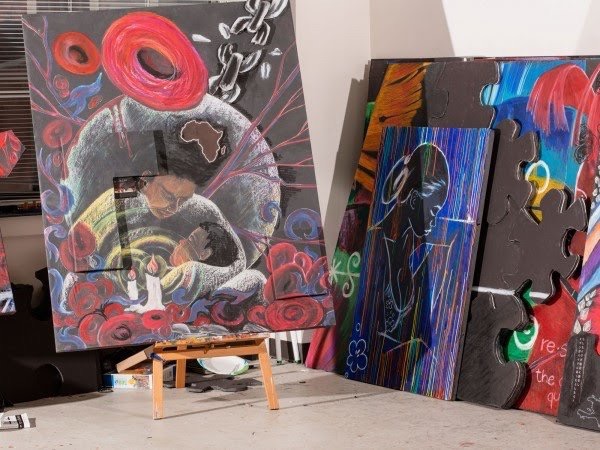 Porteus says not all of a patient’s original sickle cells need to be replaced with edited ones to effectively cure the disease. He says if the proportion of sickle cells is below 30 percent, patients don’t have any symptoms. So far, his team has been able to achieve correction rates between 40 and 70 percent. He expects corrected blood cells to eventually surpass sickled ones in a patient’s body. Sickle cells live only 10 to 20 days, but normal red blood cells last from 90 to 120 days.

The first clinical trials using CRISPR haven’t started in the U.S. yet, but researchers are already taking steps to educate patients about the technology. The National Institutes of Health is launching a story this month to examine opinions on the technology among up to 150 sickle-cell patients, parents of patients, and health-care providers.

Vence Bonham, a researcher on genomics and health disparities at the National Human Genome Research Institute who is leading the study, says it’s important that scientists designing clinical trials consider patients’ beliefs and concerns. Gauging the views of people who are most likely to be affected by a new scientific advance seems like a no-brainer, but it’s something that’s rarely been done in medical research. “This technology has been moving very quickly, but the disease and advocacy communities have not really been part of the conversation,” Bonham says.

Participants in the NIH study will first be asked about their knowledge of CRISPR. Then they’ll watch an educational video about the technology and answer a second set of questions to see how the video may have influenced their knowledge or beliefs. After that, they’ll participate in focus groups with other patients, parents of patients, or health-care providers to talk about using CRISPR for sickle-cell disease. Bonham hopes the study will “inform the development of clinical trials to make them more appropriate and respectful of the concerns of the community.”

Biree Andemariam, director of the New England Sickle Cell Institute at the University of Connecticut Health Center, has started talking to her adult patients within the past few months about CRISPR’s potential for treating sickle-cell disease. “Patients are very intrigued by it. They think it sounds wonderful,” she says.

But Andemariam says there can also be trust issues between sickle-cell patients and their health-care providers. Black patients may be suspicious of signing up for clinical trials, particularly given historical examples of medical experimentation on African-Americans without their consent. The infamous Tuskegee study, for example, left African-American men with syphilis deliberately untreated in an experiment that ran from 1932 to 1972.

“The Tuskegee experiment is fresh in lot of people’s minds even though that was decades ago,” says Andemariam, who is also chief medical officer for the Sickle Cell Disease Association of America.

If a CRISPR cure for sickle-cell eventually reaches the market, one major question is who will have access to it. Isaac Odame, a Ghana-born physician at the Hospital for Sick Children in Toronto, who specializes in sickle-cell disease, says patients in Africa already have trouble paying for hydroxyurea, a common medication used to treat the disease. The drug costs one to two dollars per day, but even that is too expensive for many, he says. He worries the cost of CRISPR will put a cure out of reach for most of the world’s patients.

“For 90 percent of people with sickle-cell disease who live in this world, this will still be something far too expensive for them to have access to,” he says.

Until CRISPR is available, sickle-cell patients will have to cope with other treatments. To manage his disease, Nazaire recently underwent apheresis, a transfusion procedure that removed and replaced some of his red blood cells in an attempt to decrease the proportion of sickled ones. He’s in less pain than before, but the benefits could wear off over time.

To Nazaire and others, CRISPR represents the promise for a better, longer life. That hope might not be far off, with both academic and commercial labs racing to develop CRISPR-based therapies. “When you’re faced with something that’s desperate and life-threatening, you want to see something done about it,” he says. “I think this is something that needs to be used. It could be beneficial for the world.” 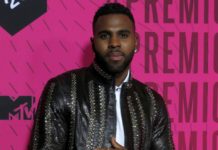 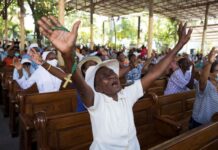 Haiti has no Covid vaccine doses as violence looms larger than...