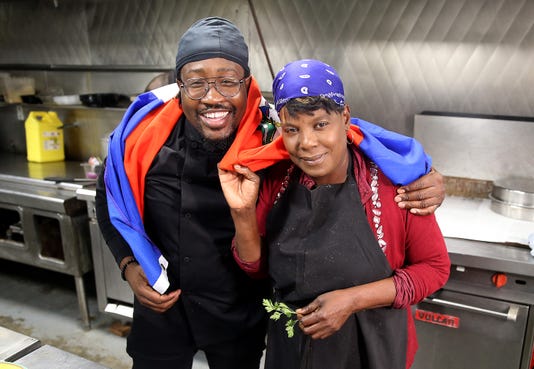 Ricardo Jean-Baptiste was born in Haiti. In the United States, he became a chef. He moved to New Orleans in 2015 for a job at a large hotel that caters to tourists and conventioneers.

“When I came here the first day, I’m almost crying because everything looks similar,” Jean-Baptiste said. “It was like memories, memories running through my head.”

The shotgun houses, those narrow blocks that form many New Orleans neighborhoods, were just like houses in Haiti, down to the exact dimensions. The bright colors on buildings edged with Victorian frills were reminiscent of the vivid hues that decorate Caribbean homes. The second line parades through New Orleans streets were like the rara. And the food of New Orleans took Jean-Baptiste back to his childhood in Haiti.

“The gumbo, so flavorful. Reminds me of home,” he said. “We do something similar to gumbo, except we don’t use roux.”

Before he first ate in the city, Jean-Baptiste was already familiar with the taste of New Orleans’ Monday staple of red beans and rice, the starchy but bland mirlitons, also called chayotes, and the many ways Louisianans cook okra (except for pickled okra, that was new for him). Each dish had an analog in his native Haiti.

The city of New Orleans, citing the latest census data, puts the local Haitian population at 1,500. Members of that community, however, think it might be as large as 6,000 or 7,000, having grown since the massive earthquake in 2010 that devastated Haiti.

Since New Orleans was founded three centuries ago many people have added layers to its culture. But the wave of immigrants at the turn of the 19th century, fleeing the revolution that created Haiti, transformed New Orleans from a minor outpost to a major city. That influence has not always been recognized.

Those refugees doubled New Orleans’ population. They found a place where French was spoken, and as Americans poured in after the Louisiana Purchase in 1803, they bolstered the city’s French identity. They came to a land that, like the colony they left, had free people of color. In the United States, they also found a place, like Haiti before its revolution, where enslaved blacks still worked the land.

They brought their experience and skills farming lucrative sugarcane to Louisiana and “helped reduce the risk of failure in a nascent industry that required large capital outlays and production on a massive scale,” according to Alfred N. Hunt’s “Haiti’s Influence on Antebellum America: Slumbering Volcano in the Caribbean.” Here, white people and free black people from the colony the French called Saint-Dominique succeeded as bakers, shop owners, musicians, cabinet makers and engineers. They added sidewalks and installed streetlights in New Orleans. They founded newspapers, opened schools and created theaters.

The flavors they introduced to New Orleans are harder to trace than their businesses that left behind buildings and logs of taxes paid and profits made. And cooking, in the time before global transportation, was forced to adapt to different ingredients when the cooks moved to new lands. Two centuries later, though, the familiar flavors that Jean-Baptiste and other recent Haitian immigrants taste in New Orleans prove the depth of that influence.

Chef Donald Link, who grew up in Cajun Country and runs the celebrated New Orleans restaurants Herbsaint, Cochon, Gianna and Pêche Seafood Grill, noticed the same culinary kinship. The more he traveled across the Caribbean, the more he found “mirror dishes” for what he knew from Louisiana and the South.

“In looking at the history of this food and the Caribbean, this food really exists solely in the Caribbean for 200, 300 years before it ever shows its face in the United States of America,” Link said.

“That’s the one thing I can say throughout the Caribbean with compared to here,” he said, “is the salt level and the heat level are almost identical between Creole, Cajun, soul food and Southern food.”

The arrival of the refugees from Saint-Domingue kept those flavors strong at the moment when Americans brought blander palates to Louisiana.

“When we talk about the influence of the islands in general, especially Haiti, we cannot help but think that they’ve formed the cooking styles of the Africans that eventually made their way into the kitchens of New Orleans,” said John Folse, chef and culinary historian.

Folse said the “black pot cooking” of Louisiana, where gumbos, gravies and vegetables simmer slowly in cast iron, has its roots in the Caribbean and before that in West Africa.

“Everything we start with, we nearly burn it before we get to the next thing,” said Charly Pierre, who runs the Haitian stall Fritai inside New Orleans’ St. Roch Market. “We really pull out the flavors.”

Pierre, who was born in Massachusetts to parents from Haiti, clearly sees the influence of the island nation in New Orleans, even if that connection at times gets concealed.

“The food and all, it’s still here. It’s just that people don’t know about it,” he said. “The history, New Orleans has never allowed us to speak for it. I always think about how come there’s no Haitian plaque? Well, because it’s a Confederate statue in the place of that.”

This summer, Jean-Baptiste partnered with other New Orleanians from Haiti to opened Rendez-Vous Creole on the West Bank, across the Mississippi River from downtown New Orleans. It’s the neighborhood where most Haitians now live.

Decorated in a bold patchwork of colorful murals, Rendez-Vous Creole restaurant houses a pool table, DJ booth and a small stage. It’s somewhat the unofficial clubhouse for the Haitian-American community. It is also a place to teach New Orleans about a cuisine that may be foreign but not unfamiliar.

Jean-Baptiste wants the city to know about epis, the blend of garlic, peppers and herbs at the foundation of so many Haitian dishes. He wants them to taste conch simmered in Creole sauce, the sharply spicy slaw pikliz, the starchy, smashed plantains called bannan fri and gratine, a mac and cheese he makes with ground beef.

Jean-Baptiste hopes the city will come to crave griot, the chunks of pork washed with lime, braised until tender and then fried crisp. It’s the national dish of Haiti, he said. He will serve it at Rendez-Vous Creole on a plate with rice and fried plantains or, in a nod to his new home, on a loaf of soft French bread as a po-boy, the local sandwich of New Orleans. He is building new bridges between the two cuisines. 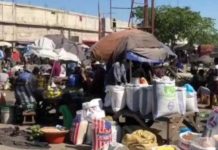 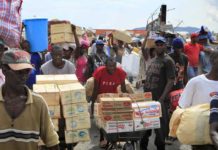 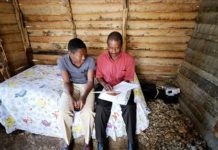 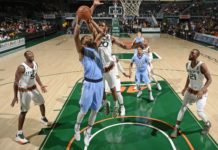